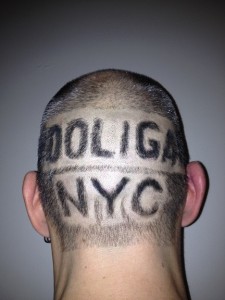 Care to face this chap in a game of ping pong?

Last year’s annual East Coast AICP Holiday Party was held at SPiN, New York’s hot new social club co-owned by Susan Sarandon. The draw at SPiN is ping pong — 17 table’s worth — along with a full bar, VIP rooms and a pro-shop. Celebration and cocktails filled the evening, along with an exhibition by table tennis pros and some friendly competition against fellow members of our AICP chapter.

Signing up for the big tournament, Team Hooligan was without its star player (and SPiN member) Eric Carlson, who was stuck working late at the studio. The rest of us came off the bench and brought our best “shakehand.” Alas, it wasn’t enough.

“When I heard the party was at SPiN, I was bummed because I wanted to be there,” remarks Eric. “There’s a guy at Cut + Run whose dad apparently was a trainer or a coach for Great Britain’s Olympic team. He played the tournament and won, of course. I really would have liked to have been there to at least play him.”

Eric’s not trying to make an “Ali-Foreman” spectacle here, but who in the NY post scene wouldn’t want to see this match-up? Could our underdog have repped Hooligan for the main event and triumphed against Cut + Run’s All-Star?

“The thing is, I’m not bad, but there are a lot of people better than me, obviously,” he says. “But if anybody wants to challenge me, they can.”

Eric got into the sport like most folks, playing for fun as a kid in London — the birthplace of table tennis — before his obsession volleyed into the workplace.

“We had a table at the Hooligan studio before we did some construction. It was great to go out and have a bit of fun playing with clients or taking a work break. It’s a great game — people really get into it.”

But don’t take Eric’s word for it, watch one of the greatest table tennis points ever and see for yourself.

Eric plays at least once a week — ever since he fell into the Naked Ping Pong circuit where he found stiffer competition. Naked Ping Pong, you say, Eric?

“There was nothing naked about it, really, but there used to be a bunch of guys who had a loft with a ping pong table,” he says. “They would throw parties. Models would go, actors would go, these parties were huge — I mean huge! So I sort of fell in with these guys and started doing their whole circuit, going places and playing around town. Soho House would have a couple of tournaments, a bunch of places on the Lower Eastside and in the Village hosted them as well. They eventually decided to open this club and then got some backing from Susan Sarandon. So I’ve met a bunch of cool people playing and it’s just sort of a fun hobby.”

“It’s a custom paddle where you choose the ‘blade’ and buy the rubber padding you want,” he explains. “Timo Ball is a German player who ranks somewhere around the top 5 in the world. It’s actually amazing if you look at the men’s rankings, the first American doesn’t comes in until a hundred-and-something. So table tennis is obviously huge in other parts of the world compared to the States. I know it was becoming the hot thing for a minute here in New York . . . I don’t know if it is anymore, but it certainly was a couple of years ago.”